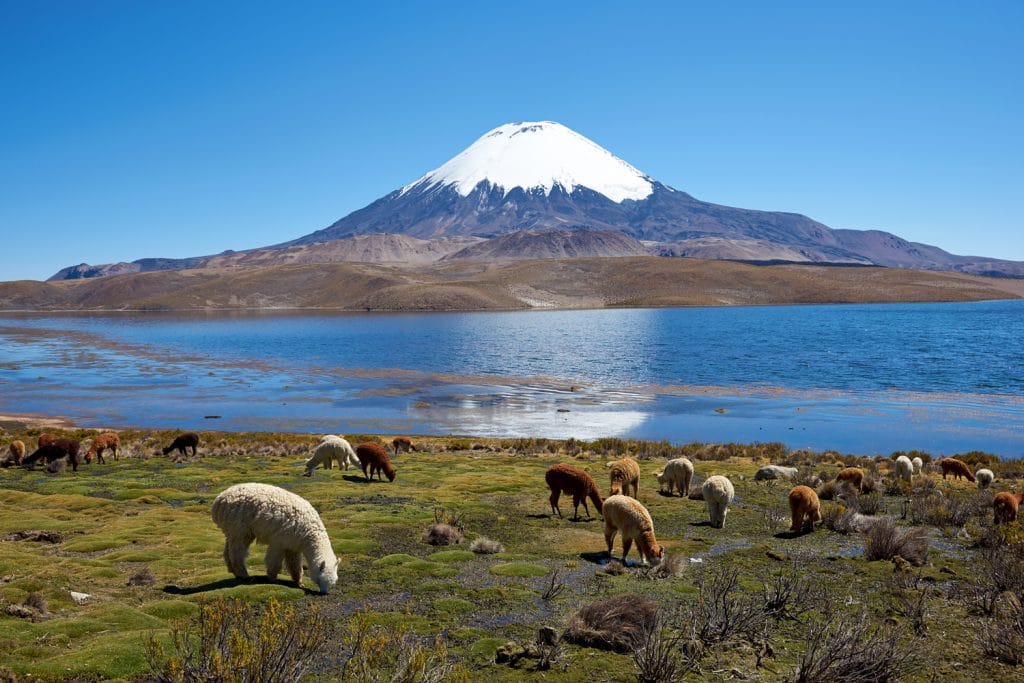 JeremyRichards / shutterstock.com
Road Affair is reader-supported and may earn commission from purchases made through links in this article.

South America is known for a tantalizing variety of things, from divine cuisines to passionate culture and nightlife. But one of the great constants no matter which country you visit is the love and care shown towards the natural world. Latin America’s national parks are some of the best you’ll ever come across, and with over 300 national parks to choose from, it’s going to take you a long time to see them all. To help you get started and plan your trip we have handpicked the best national parks in South America for you.

When you think of South America’s national parks, one that immediately springs to mind is the stunning Torres del Paine National Park. Found down in the Patagonia region of southern Chile, this vast expanse of nature is best known for its range of landscapes and unique jagged mountain peaks. Exploring Torres del Paine, you’ll be taken from breathtaking fjords to mountains, forests, and glaciers, all combining to create a place of raw natural beauty. With so much to see, it’s little wonder that this is one of Chile’s largest national parks and a great place for long overland treks.

Proving that Brazil is home to much more than just the Amazon, Lençóis Maranhenses National Park showcases one of Brazil’s many fascinating landscapes. With a visit to this protected area in the country’s northeast, you’re treated to an endless expanse of gleaming white sand dunes that separate rippling teal lagoons. While you get to see this unique landscape in its entirety from the air, visitors also often hike and journey on horseback through Lençóis Maranhenses, cooling off in the freshwater as they go. Lençóis Maranhenses National Park is easily one of the top 10 national parks in America, North and South.

Sitting up in the high reaches of Chile’s altiplano among the Andes Mountains is Lauca National Park. Located at the very northern end of the country, Lauca features an arid landscape of high-altitude lakes, mountains and volcanoes. Despite how inhospitable this region can seem at times, it’s home to a precious diversity of wildlife, from condors and flamingos to llamas, alpacas, and even cougars. Although a popular place for hiking, thanks to sights like Parinacota Volcano, it’s best to remember that this national park is thousands of meters above sea level where the air is much thinner.

To see a fantastic display of what Brazil has to offer visitors, simply head to Chapada Diamantina National Park. Situated in the country’s eastern state of Bahia, this national park is home to a splendid array of landscapes. Mountains, plateaus, highlands, and waterfalls are all on the menu here, but it’s really the rock formations of Chapada Diamantina that make it stand out. The park features some magnificent caves, like Torrinha Cave and Lapão Cave, as well as beautiful underground rivers that you can swim in. Just know that this park is immense, so don’t be disappointed that you won’t see everything in one visit.

The Iguazu Falls are widely known to be one of the most beautiful waterfalls in the world, but did you know that they’re part of a national park as well? Iguazu National Park in Argentina includes not only the famous waterfalls, but also the rainforest around them on the Argentinian side of this landmark. It should be no surprise that the national park is a UNESCO World Heritage Site, but the honor extends beyond the waterfall to the diverse wildlife that calls the park home, including jaguars, tapirs, and ocelots.

For an exotic dose of jungle and beach by the Caribbean coast, head for Tayrona National Park in northern Colombia. Hidden away behind mountains about an hour’s drive up the coast from Santa Marta, Tayrona is a popular destination for swimming, hiking, and camping. While beaches like Cabo San Juan and La Piscina offer beautiful beaches and sheltered water, much of the coast is far less tame, but still strikingly scenic. Then there’s the dense rainforest and the Sierra Nevada de Santa Marta mountain range, which is home to a great diversity of flora and fauna, including the endangered cotton-top tamarin.

Holding the honor of oldest national park in Brazil is Itatiaia National Park, which was established back in 1937. But Itatiaia has a lot more going for it than just that. Located among the Mantiqueira Mountains in the country’s southeast, it’s a rugged place full of superb scenery over an impressive range of altitudes. The park’s varying elevation allows for all sorts of environments and landscapes, including rainforest, alpine meadows, lakes, and rivers. It also also offers up one of the highest points in all of Brazil with the Pico das Agulhas Negras. Popular activities here include trekking, mountaineering, and birdwatching.

Often dubbed as the “End of the World,” Tierra del Fuego National Park is one of the most mesmerizing of Argentina’s national parks. Sitting among the archipelago of islands at the very bottom of South America, this national park covers the Argentinian side of the island of Tierra del Fuego. This remote location gives Tierra del Fuego National Park a quiet and dramatic atmosphere that’s only amplified by its stunning scenery. Glaciers, waterfalls, and subantarctic forest are all in great supply, as are local critters like the Andean fox and beavers. Of course, with such a wild and beautiful place to explore, the park is a popular hiking destination for tourists.

Argentina isn’t one to disappoint visitors, especially thanks to destinations like Nahuel Huapi National Park. Not only is this the oldest national park in Argentina, it’s also one of the most visited, delighting intrepid travelers with lakes, glaciers, and wildflowers. The centerpiece of the park is Nahuel Huapi Lake, which it’s named after. But there’s much more to Nahuel Huapi National Park, as its place in the foothills of the Andes Mountains gives it both monumental mountains and icy glaciers. Throw in gorgeous alpine meadows of wildflowers and you have yourself a photographer’s dream destination.

A major aspect of so many national parks is their wildlife and biodiversity, and that’s certainly the case with Amboró National Park in Bolivia. Located at the ‘Elbow of the Andes’ near the heart of the country, this park is home to over 900 species of birds and 177 species of mammals. Amboró National Park has a variety of diverse ecosystems, including cloud forests, semi-arid lowlands, and rainforests. Noteworthy animals found in Amboró include pumas, ocelots, and spectacled bears. The park’s protected status is very important due to mining, hunting, and deforestation threatening this biodiversity.

Probably the most famous wildlife destination on the planet, Galapagos National Park is one of the best national parks in Latin America. 97 percent of these remote islands off the coast of Ecuador have protected status, and the Galapagos is home to many different wildlife conservation projects. Visiting the islands, you get the opportunity to see huge Galapagos tortoises, lazy sea lions, iguanas, and the blue-footed boobies. But then there are the volcanic islands themselves to explore, with volcano hikes, rock pools to soak in, and plenty of scuba-diving and snorkeling among sharks and manta rays to keep you occupied.

People often think of national parks as only being off in far-flung corners of the world, but Tijuca National Park actually lies within the city limits of Rio de Janeiro in Brazil. Often considered the largest urban forest in the world, the national park is part of an effort to restore the land around the city to its natural state after it was cleared for coffee and sugarcane plantations. Besides its rainforest, Tijuca National Park is also home to waterfalls, creeks, and various man-made landmarks. Visitors here often like to bring picnics and go for walks and hikes on the park’s many trails.

Volcanoes are everywhere in South America, it seems, and Ecuador’s best is right at the heart of Cotopaxi National Park. Cotopaxi is the country’s most famous volcano and reaches an elevation of 5,897 meters, which is a temptation too strong for many hikers, trekkers, and climbers to resist. The national park also is home to quite a range of bird life, and has its fair share of archaeological ruins as well. Situated close to the center of Ecuador, the national park would be a much more well-known destination were it not for the shadow cast by the country’s world-famous Galapagos Islands.

Remote and covering a broad range of environments due to its size, Manu National Park is a very important national park in Peru, not to mention the nation’s largest. Its borders range from plains in the Amazon Basin up into forests and grasslands in the Andes mountains, giving it a great depth of biodiversity. As such, it’s no surprise UNESCO recognized it first as a biosphere reserve and later a World Heritage site. The remote location of Manu National Park to the north of Cusco has luckily helped preserve the park and its many species of birds, insects, and other animals.

There’s no doubt that the most well-known attraction in all of Venezuela is the mighty Angel Falls, the world’s highest waterfall. What people might not realize, though, is that the falls belong to Canaima National Park, a park with loads more to offer those who care to linger a little longer. In addition to more waterfalls and rivers, Canaima is home to majestic table-top mountains and lush equatorial rainforest that’s full of different ecosystems and all kinds of fauna. Perhaps the most distinctive feature though of Canaima is its tepuis, plateaus with very sheer cliffs, like you see with Mount Roraima.

Explore yet another side to Brazil with Pantanal Matogrossense National Park out in the country’s west, by the Bolivian border. This national park covers a portion of the Pantanal Biosphere Reserve, which is the world’s largest tropical wetland, offering up yet another different landscape to travelers in Brazil. During the rainy season, around 80% of the park and wider floodplains are under water, allowing great biodiversity in its local aquatic plant life and feeding a remarkable range of fauna, from jaguars to giant otters.

Found among Chile’s Lake District in the country’s south, Vicente Pérez Rosales National Park is a place of breathtaking beauty. The park is best known for the Osorno Volcano, the snow-capped peak of which is nearly symmetrical and never produces a bad photo. But there’s much more to see in this expanse of lush temperate rainforest, volcanoes, and lakes. For instance, there’s the pretty Petrohué Falls that do a good job of providing a foreground for your view of Osorno. Outdoor sports and wildlife spotting reign in Vicente Pérez Rosales with options including hiking, kayaking, and even skiing if your timing is right.

One final park from Brazil to round out this list is the isolated wonders of Fernando de Noronha Marine National Park. Situated way out in the Atlantic Ocean, 200 miles off the Brazilian coast, this tropical national park covers a collection of volcanic islands that are extremely well-protected. In the waters around Fernando de Noronha you’ll find all manner of marine life, from sharks to sea turtles to dolphins, making it a delight for animal lovers. The islands also boast some gorgeous untouched beaches that you won’t have to share with too many people.

We’ve only scratched the surface of what South America has to share with you, but that should show you just how diverse and wonderful the continent is to explore. Wherever you choose to start, you won’t be disappointed.